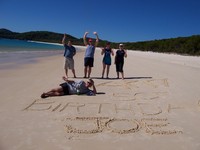 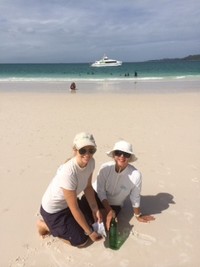 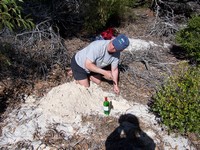 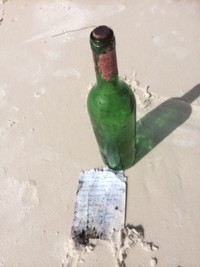 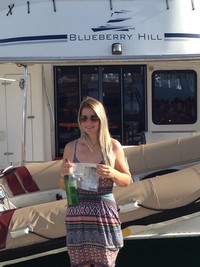 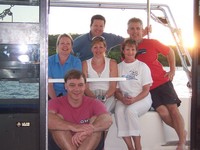 A message in a bottle that was left 10 years ago has been found on Whitehaven Beach in the Whitsunday Islands, Queensland, Australia.
Staff from Cruise Whitsundays found the bottle lying in the sand dunes of world famous Whitehaven Beach and found a message inside.
The message was damp and as it was removed small bits fell off and blew away, but were found and the note put back together, revealing the message left by six holidaymakers in 2004.  The message reads:

“5th August 04.  We, the good friends and crew of the ‘Blueberry Hill’ DO PLEDGE to return to this spot at a time in the future to retrieve this bottle and remember the good times we’ve had and the good friends we have. Signed by [signatures].”

Joe and Susan Marguccio and Wayne and Sandy Henderson (both of Melbourne) and Pete and Marion Heywood (now of Sydney) chartered the motor catamaran ‘Blueberry Hill’, on a ‘skipper yourself’ or ‘bareboat’ holiday with Cumberland Charter Yachts in August 2004 to celebrate Joe’s 50th Birthday.
They brought the bottle of Penfold’s St Henri up from Melbourne with them and was one of many bottles enjoyed on the trip.
On cruising to Whitehaven Beach and spending the day there, they wrote the note, signed it, took photos, tied a small yellow rope to a tree as a marker and buried it deep in the sand dunes, making a pact to return one day and find it.
“Ten years ago, we had no idea it would get to this! We thought we'd be lucky to find the bottle!” said Joe Marguccio on learning of the discovery.
Cherie Louise, who found the bottle along with co-worker Monique Hartley-Smith, said the pair were completing their standard check for rubbish on the beach before departing with day cruise guests when they saw the bottle lying in the sand dunes.
“We joked before we picked it up – wouldn’t it be funny if there was a message in it!” Ms Louise said.
“There was – we were thrilled and proceeded to try and remove the note but because it was damp some bits flew away which we had to walk up the beach and recover so we were able to read the note,” she said.
“It was then that we googled ‘Blueberry Hill’ and tracked it down as being a Cumberland Charter Yachts vessel so we contacted them to let them know,”
“From there they were able to pin down the group who hired the ‘Blueberry Hill’ all those years ago and the story was complete!”
The Hendersons had returned to the Whitsundays in 2008 and searched Whitehaven Beach high and low but could not find the tree or marker and disappointedly returned to report to their friends that they suspected they would never again find it.
“We were quite confident of being able to locate the area because at the time when we buried the bottle, we had taken photos both from the beach and looking back from the ‘Blueberry Hill’,” said Sandy Henderson.
“Little did we think at that time how quickly trees and shrubs grow and areas change, Wayne and I walked the length and width of Whitehaven for hours and could not find any signs of where that bottle could be!” she said.
“Then last year Wayne and I travelled to Queensland again and spent four days in Airlie Beach so we visited ‘Blueberry Hill’ in the marina to reminisce about the fantastic time we spent on her in the Whitsundays and sent photos back to the others,”
“We are all still good friends and celebrate everybody's ‘milestones’ and when we are together always talk about the ‘Blueberry Hill’ and Whitsundays and rate it as one of the best holidays we have ever done and would recommend it to anyone, a must for the ‘bucket list’!”
Cumberland Charter Yachts together with Cruise Whitsundays has offered for the group to return and have another Whitsundays sailing holiday in August 2014 to celebrate Joe’s 60th Birthday and to meet Cherie and Monique.
go back