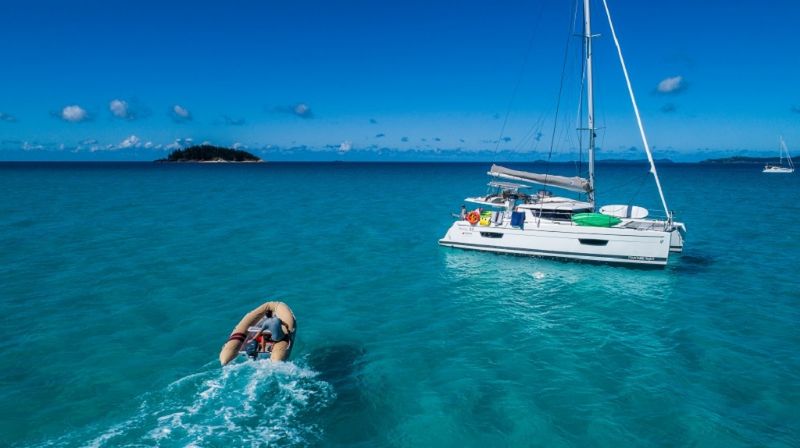 The Whitsundays reveals many island secrets as it begins a post-pandemic renaissance.

THE HUMPBACKS HAVE arrived early in the Whitsundays. It’s one bit of good news in a year that’s been starved of silver linings.

“Maybe it’s because the water’s a bit cooler this year, but we’ve already seen some pairs,” veteran yachtie Charlie Preen tells me from Airlie Beach. Usually they start arriving from Antarctica in July; peak season is August to October when the Coral Sea is transformed into a nursery for baby whales.

His news might sound a bit academic for anyone keen to actually see whales in the Whitsundays. At the time of writing, most Australians still can’t breach Queensland’s borders. But it’s a good idea to start dreaming and planning – locals are optimistic the border might open to interstate travellers sometime in July, just in time for peak sailing, and whaling, season. (And for Queenslanders, with interstaters and international visitors locked out, the island chain is all yours to enjoy.) Few journeys capture the laid-back freedom of Australian travel like charting a course through the 74 islands of the Whitsunday Passage on a bareboat (sail yourself) yacht. Now that winter has arrived with a vengeance down south, there’s almost nowhere I’d rather be than drifting around Queensland’s most magical archipelago, where the skies are bluer, the air is warmer and the sea shimmers with the promise of carefree days.

Charlie has been managing director of Airlie Beach-based Cumberland Charter Yachts for more than 20 years and knows the island group better than most. Business has been dead lately, of course, but bookings are coming thick and fast now (Queenslanders make up about 40 per cent of his business) and he’s expecting the next 12 months will be a boomtime since none of us can go overseas.

As part of preparations for my dream postiso adventure, I call him for insider tips on the best Whitsundays itinerary. I catch him as he’s heading out for the first Wednesday evening regatta since lockdown eased. He sounds very cheerful. “The weather’s perfect. If we had video I’d show you the sky – there’s not a cloud!” he cries down the phone. “We’re walking around in T-shirts and shorts, with a nice 10-15 knot breeze blowing. It’s a hard place to live, up here.”

Charlie and I covered many of the region’s beauty spots when we sailed together on a 10-berth catamaran a few years back. One evening we anchored overnight at Whitehaven Beach, famous (and much photographed) for its sweep of white sand lapped by pastel-blue seas. The sunset was a stunner but it’s the morning I remember best, when I woke and dived straight into the sea, swam to shore, and had the beach and bush tracks of Whitsunday Island all to myself, before tourist boats arrived.

There was a sun-drenched lunch on the deck at Blue Pearl Bay, where plump green turtles kept popping up to eye off our seafood. We hiked to Tongue Point lookout for gull’s-eye views over the milky swirl of sea and sand between Whitehaven and Chalkies beaches, the shallows mottled by sharks and rays. And then a snorkel in Butterfly Bay off Hook Island, where I was mobbed by kaleidoscope fish.

Charlie has plenty more island-hopping secrets to share. Some of the most underrated islands, he says, are down south – such as Shaw Island which has a secluded anchorage and some lovely beaches that few visit.

For snorkelling, he recommends the north end of Hook Island. Turtles are found “all over the place” but are particularly prolific at Langford Reef, a small sand island near Hayman, at Stonehaven Bay on Hook Island and at Turtle Bay on Whitsunday Island.

Dolphins can pop up anywhere. Dugongs prefer the seagrass meadows off the mainland and islands north of Airlie Beach. Woodwark Bay is a good bet. “Double Bay and Woodwark are unexplored places that the charters don’t go to very much,” Charlie says. “But the locals all hang out there because it’s good crabbing.”

The beauty of Whitsunday bareboat charters is anyone can play at being skipper. Novices receive several hours of instruction – an area brief, boat familiarisation, sailing test and so on – and if they’re absolute beginners a sailing guide comes along for the ride on day one. But there are also power boats for hire that require no sailing skills at all.

“And it’s not just the sailing,” Charlie explains. “It’s the adventure … You’re in charge of your destiny. There’s just this sense of freedom out there. And that’s the difference.”

With the added bonus, of course, of built-in isolation and social distancing. “Come up here, take a boat out for a week or 10 days, and you don’t have to see anybody else.”

Kendall Hill was hosted by Cumberland Charter Yachts in partnership with Tourism Whitsundays.